It’s been incredibly hot this week in Victoria.  We have more days than I’d like to remember above 40 and I’m so glad I was able to complete this job before the heat hit.  In fact the amount of sun we are getting is powering up the battery perfectly.  I just wish I had the van out camping to give the setup a good run. Anyway onto part two of the install.

I did this in two steps.  I mounted the panels to the roof first.  I used a whole tube of Sikaflex 252 to ensure they aren’t going anywhere.  That stuff is amazing and should do the job.

A couple of days later we took the plunge and drilled through the roof into one of the wardrobes.

I drilled a 1 mm pilot hole so we could make sure that it was going to go exactly where we wanted it to go.  The wardrobe has a “channel” that the cable could run down and never been seen or get in the way.

As always measure twice and cut once.  We confirmed we had the correct spot but I needed to cut away quite a bit of the original silicone in order for the cable entry box to fit snugly.

Then it was just a matter of drilling the large hole through the roof.  As always it’s a little daunting drilling into your van but we had made sure it was the right spot.

I again used another heap of sikaflex to ensure no leaks and no movement of the entry box.  Placing a brick on top of the box also ensured that while the silicon cured it didn’t move.

The next day the brick was removed and the cables tied and clipped to the roof to make sure it was all neat.

The two 50w panels mounted on the roof.

All up it cost less than $150 to put our panels on the roof.  Obviously we already had the panels and we had the REDARC BCDC 40A unit which has solar input.  I am very happy with the result and it’s keeping the battery completely full.  Within one day the REDARC unit had gone from Boost, through absorption and is now constantly on float.

Due to the REDARC unit being able to convert a lower voltage to a higher voltage it starts charging the battery a lot earlier in the day and stays charging later in the day.  I really don’t think we will ever need to increase the size of the panels.

Now I want to add another battery to the system. Ssshhhhh….don’t tell the better half.

A couple of years ago we purchased an Evakool folding solar panel.  It’s a 100 watt panel with decent cables (connected to anderson plugs) and is very well built.  It has been a great panel and has got us out of a couple of sticky situations in its time.  I liked the fact I could position it in what ever direction i needed to get the battery charged.

I was always a bit concerned about roof mounted panels and how good they work if they were in shade etc but a friend of ours mounted his solar panels on the roof of his van and they are performing much better than I expected.

After recently installing a Redarc 12v BCDC 40 Amp battery charger in the van I’ve decided that it was time to mount a solar panel on the roof.

The combination of both devices would be more than enough to keep us topped up with power as we don’t tend to use heavy power consumption devices in the van.

I decided to dismantle the folding panel and mount it to the roof as I think 100 watt will still be ample for us.

The BCDC unit is designed to boost low voltages going into it from the solar panels into decent charging voltages for the battery so we should get more “daylight” hours from the panels.  We also don’t tend to stop for days on end at free camps so we shouldn’t need a huge power station setup on the roof.  We charge from the vehicle as we travel so we usually arrive with a full battery.

So with all these things considered, out with the tools and a new setup is born.

I pulled apart the folding panel removing hinges, latches. legs and handles.  I removed the solar regulator as the BCDC has it’s own built in regulator so no need for the panel mounted one.  The wiring was disconnected and then I was left with two 50 watt panels.

I used Sikaflex 252 to mount the brackets to each side of the panels.  The brackets are made from aluminium angle and I placed a block of wood under each so that I didn’t need to worry about measuring the gap.  Each bracket was glued into place and then three screws to hold it ensure its not going anywhere.

I then wired and mounted an Anderson plug to each panel so they can be easily plugged into when I run the cables into the van.  This may also give me options down the track to use the panel regulator elsewhere and plug something directly to a panel for an emergency.  It’s an option that may come in handy one day.

The panels ready for mounting on the roof 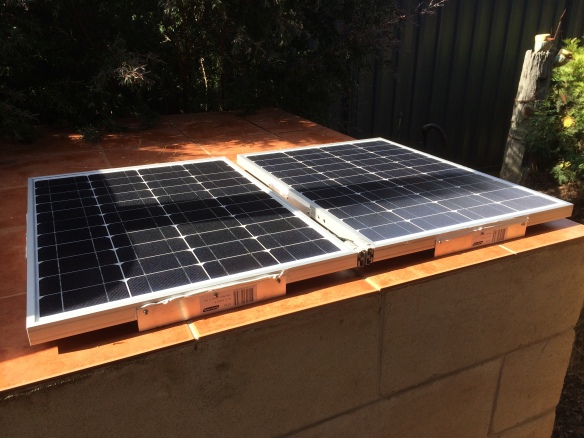 Coming soon.  Solar Modification Pt. 2 – Mounting to the roof and wiring them to the BCDC charger.

We are very excited to announce the winners of the Expander Pegs competition.

We will get your peg packs to you in the post ASAP and can’t wait to here how you use them.  Thanks for entering the competition everyone and if you didn’t win please feel free to visit the Expander Pegs website to see where you can get your own set.

Today we are announcing our first ever competition. You have the chance to score for yourself a 6 piece set of expander pegs. 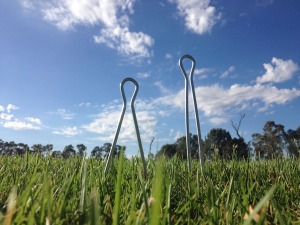 We are going to give away a set of these to five lucky followers of our blog.

When you get a set of these expander pegs you will never need to be concerned again about pegs coming out of the ground when the wind picks up. We’ve been using these pegs for awhile now and in fact we replaced all our old pegs with the expander pegs.

I’ve never needed to pack up our awning in strong winds since as the pegs just don’t move.  They stay in the ground every time.

You can see the review I did awhile ago about these pegs.

All you need to do is be following our blog and add your details below by the 15th December so we can get them out to you by Christmas.

Don’t forget you must also be following our blog to be included in the random draw. There is a button at the top right hand side of our HOME page to follow us.

We wont use your details for anything but to contact you if you win and send out your prize.

Expander pegs have donated the pegs for this competition.  We love their product and are more than happy to spread the word.

Planning for the next one.January 1, 2017
We are away on a trip and we'll be posting about it soon.

Him and Miss
Travelling Is An Adventure

Life, adventures and memories of an everyday couple.

a camping trip of ridiculous proportions

one family on an adventure around Australia

The adventures of the Fealy Family as we try to remember that 'Life is a Journey, not a Destination'.

Life is a Journey, not a Destination